Explore How A Professional Dent Doctor Repair Your Car

Home > Explore How A Professional Dent Doctor Repair Your Car 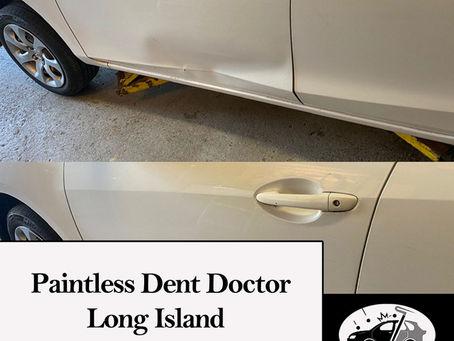 Explore How A Professional Dent Doctor Repair Your Car

Every car is vulnerable to dent, and the problem is inescapable; no matter how aware you are but the other person can hit your car at any time. The weather can also be merciless sometimes, as you know, hailstorms leave many dents on your car.

It will help if you stay aware of the paintless dent doctor in Long Island because anytime you may need a repair service. Although, you don’t need to worry about the cost as dent repair services are inexpensive. Also, a professional will hardly take an hour to repair the dent; the rest depends on the number and intensity of the dent.

Professionals quickly repair your car using their skills and technique; they follow the below-mentioned steps-

In the first step, professionals quickly assess your car; they review the dent from every angle. They determine the level of damage in your car to understand what type of tools they will require for repair.

After proper examination of the car, technicians use flashlights on the dent to identify the damage. The dented area on the car never reflects the smooth line of a flashlight; technicians use various tools to push the dent to bring back the area in the original form. A professional may also use the hot glue pulling method on the minor dents.

After completing the process, a dent technician will examine the car again to check the finishing of the dented area. They may again use a flashlight to observe the smoothness. After the final touch-up, your car is ready to take home.

Repairing a dent is not a cumbersome task; however, choosing a professional is always intelligent. If you are looking for a car dent doctor in garden city, you can rely on Steve Paintless Dent Repair, where our technicians follow the points mentioned above to repair your car quickly. You don’t need to pay unless you are satisfied with the finishing.

Steve Paintless Dent Repair offers a better alternative to traditional dent repair service from 15 years. We have many specialized car dent doctors who possess the best skill and knowledge in garden city to repair your car. You can send us a mail or call us to repair small and medium dents.