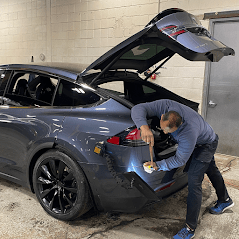 In the United States, people make the second-largest investment in cars, trucks, or motorcycles. But, unfortunately, our vehicles are always vulnerable to ugly dents or dings, and nothing can be more frustrating than seeing an ugly dent on your factory finish. A few years back, the only way to fix car dents was by going to a traditional dent repair shop, which means costly repairs and premiums from your insurance company. Repairing your car’s dents shouldn’t be time-consuming, expensive, and complicated.

Fortunately, this is where paintless dent repair comes in handy. It provides a quick and efficient way of repairing dents. Blemishes in the car’s exterior can be smoothed out without even damaging the car’s factory paint. Moreover, having a no-paint dent repair in Garden City, New York can save you resources, time, and money while maintaining your vehicle’s value and factory paint.

What can be Fixed with Paintless Dent Repair?

Though PDR is effectively used to fix small and medium-sized dents, it can also work on larger dents as long as factory paint is not damaged. Most paintless dent repairs don’t take too much time and are usually finished within a few minutes or hours.

However, the duration of the repair job also depends on the position and severity of the dent. So, when you search for a doctor to fix your car’s dent, it is always recommended to opt for a professional paintless dent removal shop in Garden City, New York.

The paintless dent repair can be used to fix the following damages:

Maintain the Value of your Vehicle

When you ignore the minor dents on your vehicle, its value decreases. PDR helps in maintaining the original factory condition of your vehicle without damaging the paint and finish.

PDR jobs can be finished much faster than traditional dent repair methods, allowing you to quickly get back on your car.

Minor dents can turn into costly affairs if overlooked for a long time. PDR fixes minor dents and saves you from the hassles of costly repairs.

At Steve’s Dent Repair, we go the extra mile to provide the best workmanship and affordable paintless dent repairs that get your car looking like new again. We are a leading dent repair shop serving Great Apple and its suburbs with the highest industry standards of knowledge and training. If you think that a newly discovered dent on your car is eligible for PDR, don’t wait further; give us a call at 347-744-0708 right away!